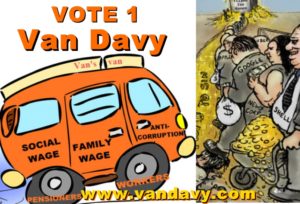 An invitation: For those who would like to stay plugged into well-informed, independent political thinking and analysis … with your questions answered and your point-of-view seen and discussed … you may like to join us on Facebook “Independent & Clean Robertson.” Please message me on Facebook “Van Davy” or text me at 0414310968 and I will enter you into this ‘closed’ group where the conversation is respectful but wide open.

Congratulations: to Lucy Wicks on her win and to Anne Charlton and Hillary Morris for their strong campaigns .

Appreciation: thank you to all those garbage truck driver-operators, Firies, pensioners and workers who nominated me. Although a little disappointed with my 2.8% of the vote I am hugely appreciative of the 1st preference support registered by 2246 voters in Robertson, and I am especially pleased that these voters were over and above the progressive Green and Labor vote and, as such, see the central significance of the economic & social damage wrought by [a] widespread corruption, and [b] massive tax evasion made legal by the Big End of Town FOR the Big End of Town and including: the highway of robbery to Tax Escapes such as the Cayman Islands and Panama; superannuation gifting, negative gearing and CGT gifting.

Commiserations: my commiserations go to all pensioners who have gained nothing from this election, will have no-one championing a national Pensioners’ Manifesto, and will probably be pushed further backwards; to all workers whose wages will continue to be undermined by the use of 457 visas and anti-worker ‘free trade’ agreements … and will suffer further attacks on Penalty rates; to small businesses which will suffer from out-of-cash workers and pensioners while receiving bugger-all from the tax cuts; to all people who know the value of the Social Wage which will now be under further attack from the two tools of “small government” … de-regulation and privatisation; to all the young people who now have no-one seeking to develop a Youth Plan and whose planet will continue to be globally suffocated and its oceans acidified and radio-activated; to the neglected ADF veterans; to the homeless.

Role of the media: Robertson residents might be interested to know that those in our community with responsibility for keeping you informed on matters of “public interest” , with the exception of this newspaper, decided to give me zero coverage. This includes all radio stations, all TV stations, and with the exception of 1 para in the last week, the Express-Advocate. Astonishingly to me, this included 92.5 ABC. With this anti-democratic information black-out imposed on my 7 month campaign [yes, 7 months] it has been impossible for me to provide information to even the majority of the electorate.

Definition of ‘local’: some people have said to me that I should be interested in local matters. I am. But, I am also interested in the BIGGEST groups of local people [pensioners, workers, small businesses] and the national issues that most affect them [social wage, family wage, corruption, mega-rich tax evasion which starves Medicare, schools, hospitals, homeless, ADF vets, child care, etc]. I am also resistant to the type of politics I regard as corrupt … pork-barrelling … blatant election bribes … a sweetener or two to distract local voters widespread national damage to schools, hospitals, Medicare, family assistance, homeless, ADF vets, environment … and so on.

What’s to be done? If you join us in “Independent & Clean Robertson” you will be helping us answer this question. The answer is important because we not only face a Liberal MHR but also an ex-Liberal Chris Holstein and his money-man John Singleton masquerading as an “Independent” umpire for the Central Coast. If you’d like to discuss … my mobile is: 0414310968